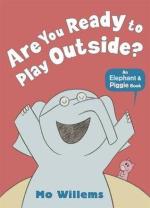 MO WILLEMS | ARE YOU READY TO PLAY OUTSIDE?

Elephant and Piggie remain in the storytelling mode of We Are In A Book! (2010). After showing up with a bandaged proboscis, Elephant proceeds to tell the “long crazy story” of how it happened. Memory bubbles let us follow along: first Elephant lifted Hippo with his trunk (“Why?” asks Piggie. “Because!” Elephant answers). But that is not what broke his trunk, and neither is the addition of Rhino and Hippo’s sister and Hippo’s sister’s piano. As usual, Willems’ use of pastel colors and vast white backdrops work minimalist wonders, making this another fine outing of this most dependable of series. Booklist”

Gerald the Elephant recounts to Piggie the crazy story of how he broke his trunk. When he was playing with Hippo, he had the idea to lift him with his trunk. As Gerald tells Piggie, “a hippo on your trunk is heavy.” But there is more to it. Rhino shows up and he wants a turn, so Gerald lifts them both onto his trunk, and so on, until he has lifted Hippo, Rhino, and Hippo’s big sister and her piano on his trunk. As readers expect, there is more to the story of Gerald’s bandaged trunk than first imagined. Willems’s now classic and predictable formula, complete with an uncluttered background, large-type word balloons, and expressive characters, is as effective as ever. The style may now be familiar, but the “Elephant & Piggie” stories remain fresh, amusing, and relevant to readers, who will sit on the edge of their seats as they eagerly anticipate the surprising turn of events. A winning addition to the series. SLJ”

Pick your order from our shop.

Order from anywhere in the world!